Education is a Right 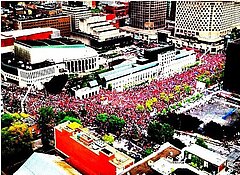 On Tuesday, May 22, approximately 350,000 protesters marched in Montréal, Québec, in defiance of Bill 78, a new provincial law which renders such protests illegal.  Many called this the largest act of civil disobedience in Canada’s history. Four days later, the record was shattered when around 500,000 Québécois from all walks of life took to the streets.  Students have been on strike since February 13, boycotting classes and participating in regular protests.